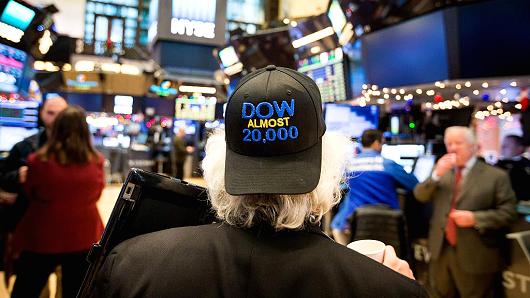 We've heard wild tales of the future Dow Jones Industrial Average (DOW). In fact, one set of analysts working for Calpers (the largest California Pension Fund – for teachers) had their ability to keep their pension fully funded on the DOW being at 28,000 by 2009 and by 2099 at 28,000,000 pts (yes, 28 million) which is just tad bit exuberant by any stretch of the imagination. That of course, was just prior to the 2008 Financial Crisis (Cite: Wall Street Journal, article; "Dow 28,000,000: The Unbelievable Expectations of California's Pension System," by David Crane, 5-19-2010).

So, as we approach the final days before we hit DOW 20K, and Christmas 2017, apparently, the stars have aligned. How did this happen so quickly, especially at a time when we were told that if Hillary Clinton did not win the election, our stock markets would tank, turns out all the major criteria are at an all-time high.

Such doom-and-gloom was also perpetuated by the mainstream media in Britain right before Brexit. So what is causing this stock market rally, and the more important question; how long will it last, as we are way overdue for a major correction, actually we've been overdue for well over a year, as many of the major companies are trading a PE ratios (price of stock over expected earnings) which are at Egypt above the Dot Com Bubble highs. The DOW at that time circa 1999 was only 9,000 points.

So, what brings us to this point in time? Many things, here are a few:

There was an interesting article in Reuters on December 20, 2016 titled: "Nasdaq rises to record, Dow bats eyes at 20,000" by Noel Randewich which stated:

"The Dow and Nasdaq Composite rose to record highs on Tuesday in a rally funded by optimism about US President-elect Donald Trump's policies. S & P 500 gaining 6 percent on bets that Trump's plans for deregulation and infrastructure spending will boost the economy "The market is focused on the Trump agenda, which is tax cuts, infrastructure spending and deregulation," said Jeff Zipper.

So, the question is: what's next? Well, it appears that Trump's Economic Plan could actually set our GDP inline for a 4% growth rate just as he promised. The FED is worried about inflation, and have already decided to step in and raise rates.

Let's face it lowering the corporate tax rate will spur growth, and with growth comes small business startups and expansion. Things are about to get interesting, and we will have some jitters and fluctuations in the market as the New Normal takes hold. Please consider all this and think on it.